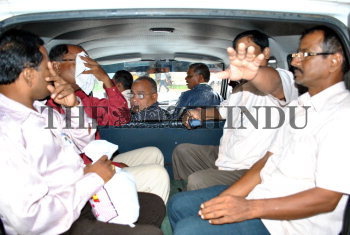 Caption : BERHAMPUR, 04/08/2010: The five arrested engineers hiding their faces as they were being brought to the court in Bhubaneswar on August 04, 2010. With the arrest of five engineers of the Rural Water Supply and Sanitation (RWSS) by the officials of the Berhampur vigilance division, large-scale corruption during the tender process in the department came to the fore. Photo: Lingaraj Panda