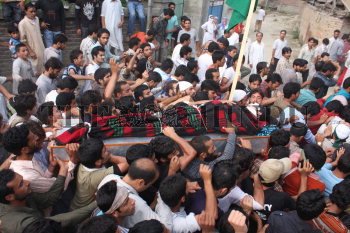 Caption : SRINAGAR, 04/08/2010: Kashmiri muslim carry the body of Mohammad Iqbal who was killed in clashes, during his funeral in Srinagar on August 04, 2010. Photo: Nissar Ahmad