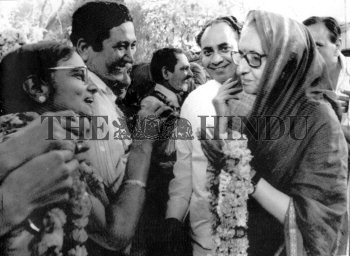 Caption : Mrs. Indira Gandhi who was defeated in the Lok Sabha election along with her party in 1977, contested a by-election in Chikmagalur, in the southern Indian State of Karnataka in 1978, a seat offered to her by the Karnataka CM, Devaraj Urs. She won the seat, the results were announced on November 8, 1978. A large number of her admirers greeted her in New Delhi.