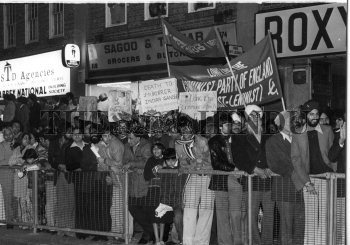 Caption : Mrs. Indira Gandhi was shouted down on November 14, 1978 by hundreds of demonstrators when she tried to address a meeting at Southall, which had the greatest Indian population in Britain. The former Indian Prime Minister, who is on a week's private visit to Britain, spoke for 13 minutes before the jeers and boos brought her speech in Hindi to an end and she left through the back door of the Cinema.