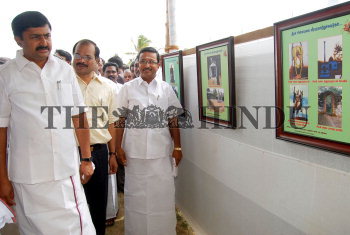 Caption : ERODE, 03/08/2010: State Highways Minister M.P. Saminathan (left) taking a look at the exhibits after inauguration of a photo exhibition organised to mark the death anniversary of Dheeran Chinnamalai at Odanilai near Erode on July 03, 2010. Photo: M. Govarthan