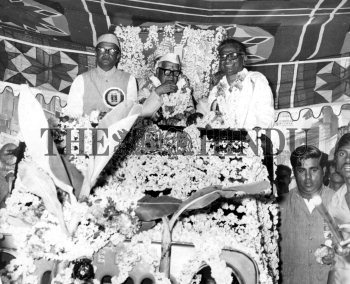 Caption : Mr. S.V. Ranganna President-elect of the All India 49th Kannada Sahitya Sammelan being brought in a procession to " Kuvempu" mantap, venue of the Sammelan in Shimoga on December 11, 1976. To his right is Mr. G. Narayan, President, Kannada Sahitya Parishad and to his left is Mr. T . Venkatarama Sastry, President of Reception Committee, Shimoga. The procession passed through the 48 arches named after each president of 48 Sammelans held so far.