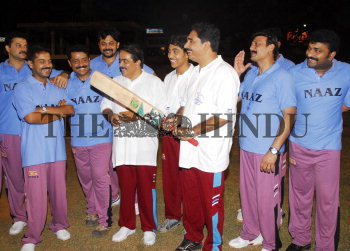 Caption : THIRUVANANTHAPURAM 22/03/2007--Ministers N.K.Premachandran and K.P.Rajendran with Film and TV stars before a friendly cricket match played in the city on March 22, 2007. Photo:S_Mahinsha