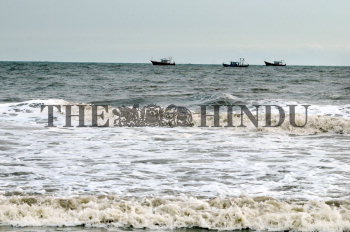 Caption : Fishermen venture out into the sea at dawn near Thrissur, Kerala on Sunday (August 1). The annual 47-day ban on fishing by trawl-fitted boats has been lifted in Kerala's territorial waters from the midnight of Saturday(July 31 ). The curb on fishing are only for boats as the Kerala government has exempted ?valloms' (canoes) used by traditional fishermen from the ban. They are free to catch pelagic fish such as oil sardine and mackerel in Kerala's 22-km (12 nautical miles) territorial waters. There are about 2,200 trawl boats in Kerala. Photo: K_K_Mustafah 1/08/2010