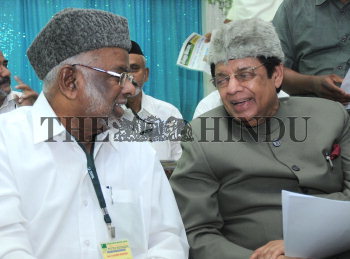 Caption : CHENNAI, 01/08/2010: Union Minister of State for Raliways and National President of Indian Union Muslim League (IUML) E. Ahamed (right) having a word with All India Secretary of IUML K.M. KHADER Mohideen at a press conference in Chennai on August 01, 2010. Photo: M. Vedhan