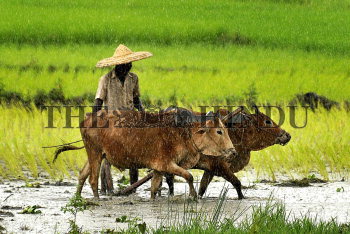 Caption : GUWAHATI, 31/07/2010: A farmer gets ready to PLOUGH his agricultural field in monsoon rain in the outskirts of Guwahati city on July 31, 2010. The northeastern region, comprising eight states, has recorded deficit rainfall during the current monsoon season and this may affect agricultural production. During the monsoon (since June 1), the northeastern region on an average has suffered a 28 percent shortfall compared to the normal rainfall, according to the India Meteorological Department (IMD). Soon after the onset of the monsoon in June, some parts of the northeastern region witnessed excess rainfall but subsequently the precipitation reversed. The deficit rainfall in Assam is recorded six percent in contrast, the rainfall deficit is maximum at 49 percent in Meghalaya. Manipur has recorded 46 percent deficit rainfall followed by Arunachal Pradesh 30 percent, Mizoram 28 percent, Nagaland 27 percent and Tripura 16 percent. According to the meet official sources a low pressure has been created in north Orissa coast, which might lead to rain in many parts of the northeast in the coming week. Photo: Ritu Raj Konwar