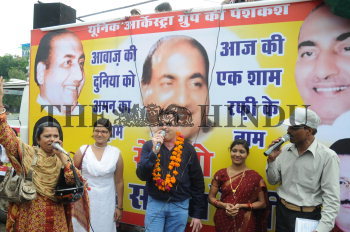 Caption : BHOPAL, 30/07/2010: Artistes presenting songs of legendry playback singer Mohd. Rafi, on the eve of his death anniversary, during a road show in Bhopal on July 30, 2010. Photo: A.M. Faruqui