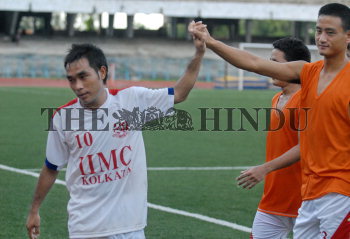 Caption : Kolkata: Mizoram's scorer Beingaichho Beokhokhei (left) being congratulated after the match against Kerala during the 64th National football championship for the Santosh Trophy in Kolkata on July 28, 2010. Photo: Sushanta Patronobish