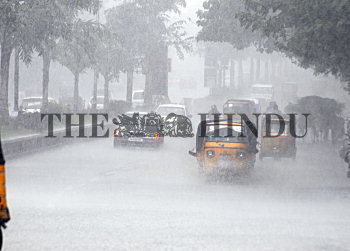 Caption : HYDERABAD, 28/07/2010: With a slew of vehicles moves on through a flooded street in the heavy monsoon showers that lasted Hyderabad on July 28, 2010 afternoon following a low pressure area has formed over North-West Bay of Bengal and adjoining West-Central Bay, South Orissa and North Andhra coast. Rain occurring at many places over Coastal Andhra Pradesh and at a few places over Telangana while isolated rain occurred over Rayalaseema. Photo: Mohammed Yousuf