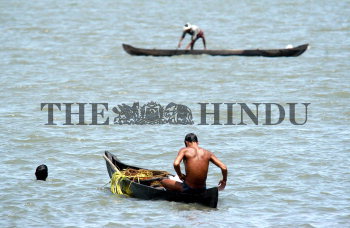 Caption : Farmers engaged in fishing near Kochi, Kerala. India has emerged as the worlds second largest producer of farmed fish, with a 4.2 per cent output in volume and value in global aquaculture. With a farmed fish output at an estimate 2.47 million tonnes in 2004 the value of the country's total reared fisheries is assessed at $ 2.93 million. Cyprinids such as carps comprise much of Indian aquaculture harvest, according to Marine Products Export Development Authority. Photo: K.K. Mustafah 16/03/07