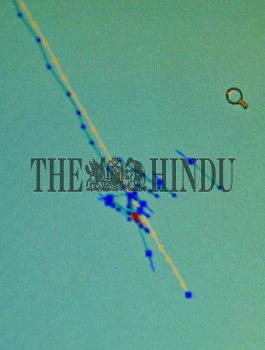 Caption : WHEELER ISLAND, 26/07/2010: Live screen shots of the radar images at the point of interception as seen on the command and control display station at Wheeler Island on July 26, 2010. The Target missile is broken into multiple pieces. India?s plans to put in place the initial phase of a robust Ballistic Missile Defence (BMD) shield by 2012 received a big thrust, with a supersonic interceptor missile, Advanced Air Defence (AAD), bringing down an incoming 'enemy' ballistic missile (a modified Prithvi) of 2,000 km range, at an altitude of 15 km over the Bay of Bengal. Photo: H. Satish