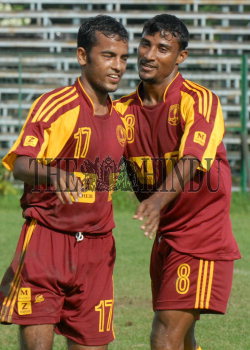 Caption : Kolkata: Kerala's O.K. Javed (right), who scored a hat-trick, and K. Rakesh, who scored two goals, celebrate in the match against Himachal Pradesh during the 64th senior National football championship for the Santosh Trophy in Kolkata on July 24, 2010. Photo: Sushanta Patronobish