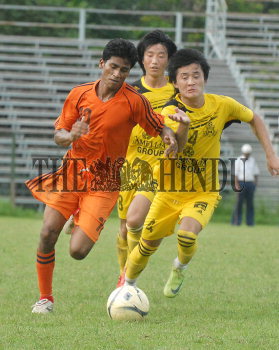 Caption : Kolkata: Wasim Raja (left), who scored Chhattisgarh's winner, leaves Sikkim's Don Tsering Lepcha and Nim Tsering Lepcha (middle) in his wake during one of his incisive runs during the 64th senior National football championship for the Santosh Trophy in Kolkata on July 23, 2010. Photo: Sushanta Patronobish