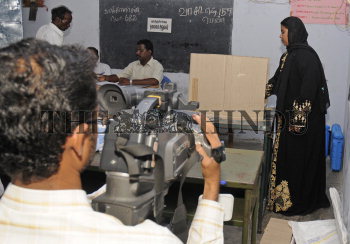 Caption : TIRUCHI, 22/07/2010: Polling in sensitive areas were recorded in video. A videographer seen recording the polling process and voters in Kamaraj Nagar for the by-election to ward 28 of the Tiruchi Corporation, in Tiruchi on July 22, 2010. Photo: M. Moorthy