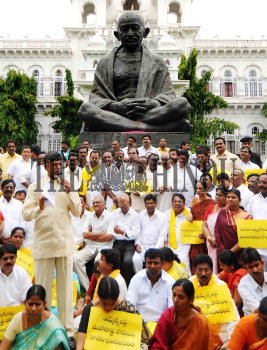 Caption : HYDERABAD, 21/07/2010: Telugu Desam Party president N. Chandrababu Naidu speaking to his party legislators on the Assembly premises during a protest demonstration against the highhandedness of Maharashtra police, in Hyderabad on July 21, 2010. Naidu and other were sent to judicial custody in Nanded, when they tried to inspect the construction of the controversial Babli dam being built by Maharashtra over Godavari river which curtail flow of water to the Telangana region. Photo: Mohammed Yousuf