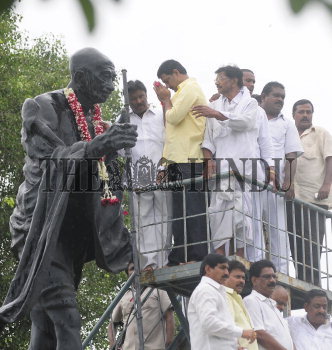 Caption : VIJAYAWADA, 21/07/2010: TDP urban president Vallabhaneni Vamsi Mohan and others pay tributes to the statue of Mahatma Gandhi as a mark of protest against the 'ill-treatment' meted out to party chief N. Chandrababu Naidu and others by Maharashtra police, at VMC office in Vijayawada on July 21, 2010. Photo: Ch. Vijaya Bhaskar