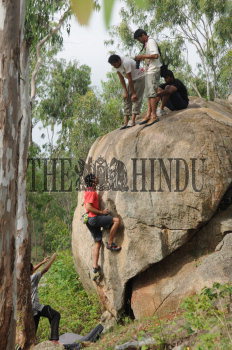 Caption : BANGALORE, 18/07/2010: Rock climbers workout at Turuhalli forest in South west of Bangalore on July 18, 2010. Turahalli is an isolated hill packed with boulders of very good hard granite of various sizes and shapes, which is most suitable for rock climbing. For last twenty years young and enthusiastic rock climbers of our city are regularly practicing rock climbing on weekends and on holidays. Many national and international climbers have visited this place. They have not only practiced rock climbing here but they have published several articles in many foreign journals on the uniqueness of this wonderful area. Turahalli hillock is a place with lot of boulders and wildlife just off Kanakapura road and around 8 kilometers from Banashankari Temple in Bangalore South. It has been the practising ground for the rock climbers in and around Bangalore for many decades. It is a dry deciduous forest with lot of eucalyptus trees and other wild shrubs and trees. Many wild animals like jackal, hare, monitor-lizard, mongoose etc have been sighted. Also, this happens to be one of the favorite places for bird-watchers as many rare species of birds are found in this area. Of late the various happenings around the place have threatened the preservation of the area. Laying of jeep tracks, felling of trees and shrubs, expansion of the temple, defacing of the boulders, crimes committed in the area have caused a lot of concern. Turahalli because of its proximity to the city makes it for a quick getaway for those wanting respite from the pollution of the city and the mundaneness of work life. Be it for children or adults, the presence of a large number of trees and boulders, which make it quite unique from other lung spaces at Bangalore, makes Turahalli quite an ideal place to rejuvenate oneself. Though a lot of greenery was cut down and ponds filled for laying of the housing plots the place is still frequented by various groups. Photo: K. Murali Kumar