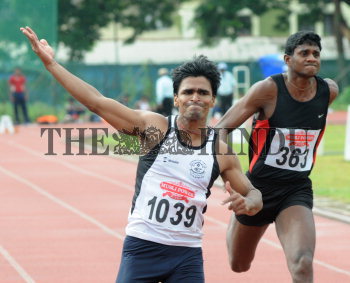 Caption : Kochi,17/07/10. K.G. Ranjith (left) of Thiruvananthapuram's Mashanja Athletic Club who won the men's 100m and emerged as the fastest man at the Kerala State inter-club athletics championship in Kochi on July 17, 2010. Photo;H.Vibhu.