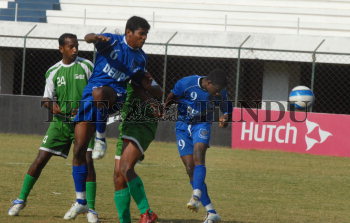 Caption : BANGALORE, 17/03/2007 : Dempo's Ranti Martins (No 9) heads in his team's first goal while his teammate Peter Carvalho (No 6) watches the action in the National football league match between Dempo Sports Club and HAL in Bangalore on March 17, 2007. HAL's Murali (No.24) looks on helplessly. Photo: K. Gopinathan