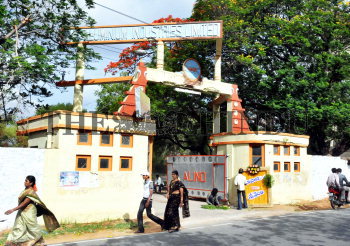 Caption : HYDERABAD (AP) - 17-06-2010 -- FROM A VIBRANT INDUSTRY TO A MARRIAGE HALL : A worker arranges a sign board of a marriage outside ALIND , an acronym for Aluminium Industries on Lingampally Road on the outskirts of Hyderabad on Thursday . A leading manufacturer of Wire Processing with divisions in Kerala , Andhra Pradesh and Orissa was started way back in 1946 and declared sick in 1987 . The process for rehabilitating Alind, initiated way back in 2003, has remained stuck in litigations against the proposals approved by the Board for Industrial and Financial Reconstruction (BIFR). With hundreds of workers laid off , it has been turned into a marriage hall and during lean seasons , Telugu flicks like 'Bhadra' , Pokiri' , 'Bangaram' and 'Stalin ' have been shot. PHOTO: P.V.SIVAKUMAR