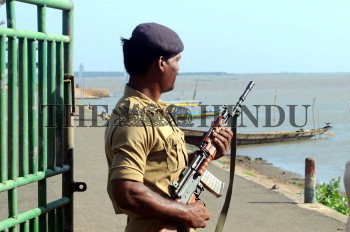 Caption : BHUBANESWAR, 16/06/2010: ARMED POLICE personnel are in vigil at Satpada in Chilka, 105 kilometers away from Bhubaneswar on June 16, 2010. Two casulaties occured after violent clashes broke out between two fishing communities of Balabhadrapur and Alupatna villages over the possession of putting fishing nets. Still Male folk of Balavadrapur are at large and fishing is abandoned. Photo: Ashoke Chakrabarty