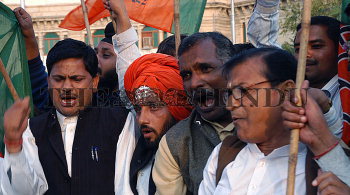 Caption : Lucknow: BJP workers demonstrating against Mulayam Singh goverment at Lucknow after a speech by M.P. Aditya Nath from Gorakhapur in the parliament for implicating him in false cases by the U.P. goverment on March 12, 2007. Photo: Subir Roy