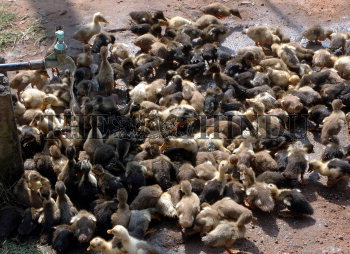 Caption : THIRUVANANTHAPURAM 10/03/2007: THIRST, NOT WASTE:A clutch of ducklings quench their thrist in rural Thiruvananthapuram, as a controversy rages in Kerala over the proposed metering of public taps. The Kerala Water Authority has provided 1.97 lakh street taps, nearly 79 per cent of them in rural areas, and produces 1635 million litres (mld) of water a day at a cost of Rs. 7.39 per KL. As concern is rising over irresponsible use of treated water, so is public worry over meters on street taps. Photo:S_Gopakumar.