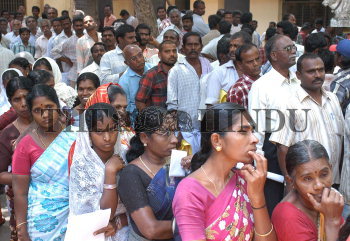 Caption : TIRUCHI: A crowd waiting in multiple queues to receive new ration cards in front of the Taluk Office in Tiruchi on March 12, 2007. The process of distribution of new cards in the place of old cards started on February 26. New applicants began to receive their ration cards since March 6. Photo:M_Moorthy