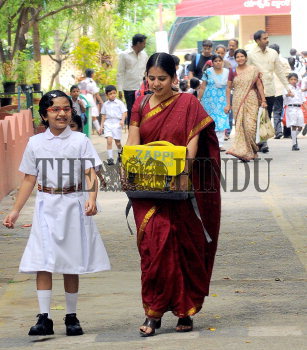 IT IS SCHOOL AGAIN FOR KIDS

Caption : HYDERABAD, 14/06/2010: It is school again for kids, well dressed children in the school uniform carrying bag of load of books and water bottle as they arriving along with their parents to school to start another year of long spell of institutionalized learning for academic year 2010-11 in Hyderabad on June 14, 2010. Andhra Pradesh Government mooted six points action to improve the standard of education in state-run schools in all districts, and launched Badi Bata (Back-2-School) program under the Sarva Shikha Abhiyaan by state Chief Minister K. Rosaiah. Photo: Mohammed Yousuf