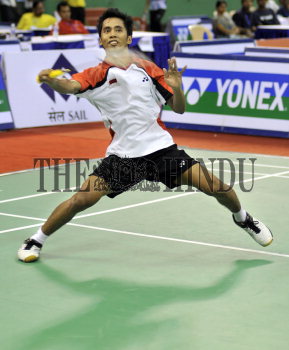 Caption : CHENNAI: 12/06/2010: Yunus Alamsyah of Indonesia in action against Chetan Anand of India (not in pic.) in the men's singles semi-finals of the Yonex-Sunrise India Open 2010 Grand Prix Gold Badminton tournament at the Jawaharlal Nehru Indoor Stadium in Chennai on June 12, 2010. Photo: S.S. Kumar