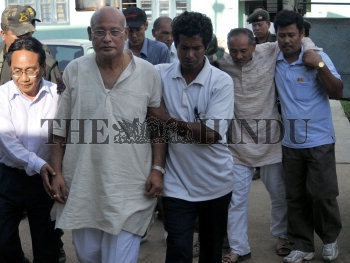 Caption : MANIPUR, 10/06/2010: President of Manipur People?s Party (MPP) Nimachand Luwang (L) and the MPP Working Committee Member and former Speaker of Manipur Sapam Dhananjoy being brought to Special Security Ward after they were arrested by the police in Imphal on June 10, 2010. Both the leaders were arrested for sitting in a fast unto death till the opening of the NH-39 and 53 as the indefinite economic blockade entered the 60th day on 10 June. Photo: Ritu Raj Konwar