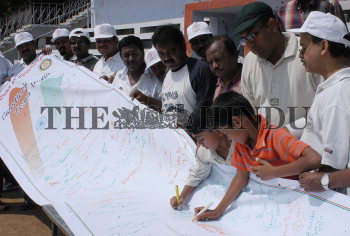 Caption : TIRUCHI: Youngsters enthusiastically participating at the Signature campaign for success of Indian cricket team at the World Cup. The campaign is organised by the Rotary Club of Tiruchi Fort in Tiruchi on March, 11, 2007. Photo:M_Moorthy