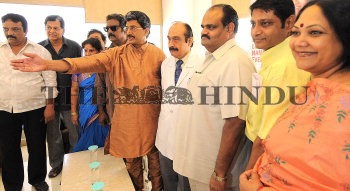 Caption : HYDERABAD, 08/06/2010: PLEDGED: Movie Artistes Association president Murali Mohan, Chief Executive Officer of Apollo Hospitals Dr. Hari Prasad and noted cardiologist Sudhir Naik, along with other artists from Telugu film industry posing for photo and video-journalists after supporting to Apollo?s ?the Billion Hearts Beating?, a campaign against heart disease which is aim to create awareness in the masses about deadly disease and its prevention message to every citizen across the country, at news conference held at hospitals premises in Hyderabad on June 08, 2010. Photo: Mohammed Yousuf