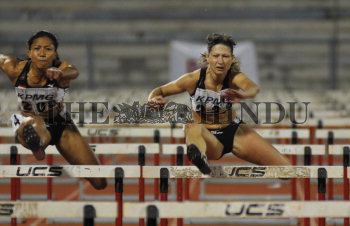 Caption : BANGALORE, 05.06.2010 : Anastasiya Suprunova (right) of Kazakhstan, who won the women's 100 m hurdles gold, in action in the second leg of the Asian Grand Prix athletics meet at the Sree Kanteerava Stadium in Bangalore on June 05, 2010. Photo: K. Murali Kumar