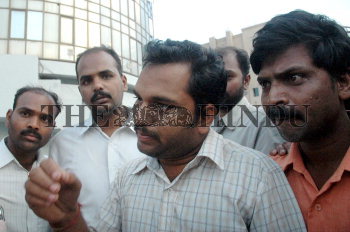 Caption : HYDERABAD: Organising Secretary of Kirby Buildings Systems India Private Limited Employees Union, Appalraju arguing with Care Hospital authorities over the alleged death of Y.Raj Kumar, an employee on March 10, 2007. The victim's colleagues allege that he died due to doctors' negligence. Raj Kumar suffered grievous injuries after a huge iron rod fell on him at his workplace on Friday morning. His colleagues first rushed him to the ESI hospital, Ameerpet, and later to two other hospitals where doctors refused to admit him. Then he was shifted to Care Hospital where doctors allegedly insisted on deposit of money before admitting him. After much persuasion, though he was admitted, he died while undergoing treatment. Photo: K. Ramesh Babu