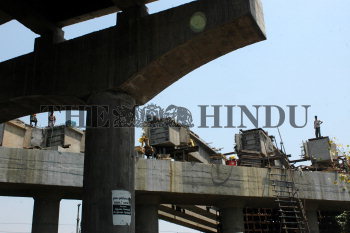 Caption : COIMBATORE: Construction of railway overbridge in progress at Ukkadam in Coimbatore on March 10, 2007. After an inordinate delay, the work is expected to be completed by April. The Union Minister of State for Railways R.Velu, inspected the site on Saturday. Photo: K. Ananthan