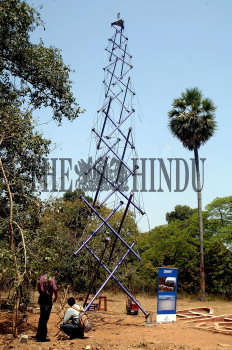 Caption : CHENNAI : 10-03-2007 : IIT MADRAS UNVEILS STRUCTURAL MARVEL : As a host perfomance is CEA Marvel, in which a team of civil engineers of IIT Madras construct a civil engineering structure, a marvel, as the name suggests. This year, the Marvel team has erected for the first time in Asia, the Tensegrity Tower is a seemingly floating tower of long steel rods, called struts, which are held together by cables. Raising up to a height of more than 10m this tower looms over other two storeyed buildings. The construction of this marvel is so complex that the Marvel team had begun work on its since an year ago. Photo : N_Sridharan