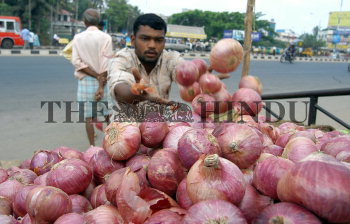 Caption : Onions being loaded in a mini truck in Kochi, Kerala. Onion exports from the country between April 2006 and January 2007 have touched 9.43 lakh tonnes against 7.70 lakh tonnes last fiscal. Maharashtra accounts for 75 per cent of the total onion exports from the country. Owing to its strong pungency, Indian onions are very much in demand in Gulf countries, Singapore, Malaysia, Srilanka and Bangladesh. Photo: K.K. Mustafah 9/03/07