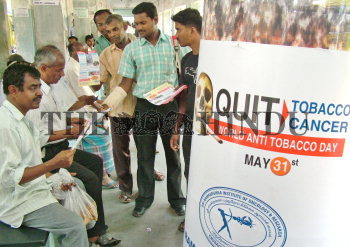 Caption : COIMBATORE, 29/05/2010: Cancer threat: SPREADING MESSAGE: Student volunteers distributing handbills on the ill-effects of tobacco at the Central Bus Stand at Gandhipuram in the city on May 29, 2010 as part of a campaign by Sri Ramakrishna Institute of Oncology and Research in the run-up to the World Anti-tobacco Day on May 31. Photo: M. Periasamy