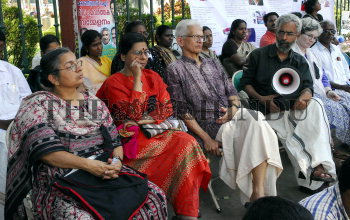 Caption : THIRUVANANTHAPURAM: The sit-in organised before the Secretariat on March 08, 2007, by the ADB Virudha Campaign Committee. Social activists who have been campaigning against the decision of the Kerala Government to enter into a loan agreement with the Asian Development Bank (ADB) have demanded the resignation of Minister for Local Self-Government Paloli Mohammed Kutty and Finance Minister Thomas Isaac in the wake of the OBSERVATIONS of the High Court against the agreement. Photo: S. Mahinsha