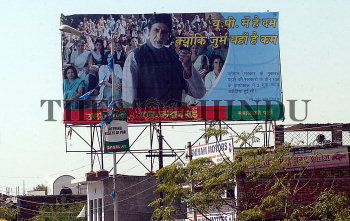 Caption : LUCKNOW: A view of the controversial billboard and television advertisement by super star Amitabh Bachchan about U.P., who is also a brand ambassador of the state being in question. Congress party has filed a petition to Election Commission against the advertisement claiming misrepresentation of facts before public. Photo: Subir Roy 08-03-2007