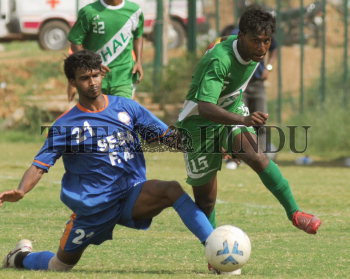 Caption : BANGALORE - 24.05.2010 : LOCAL HERO... Satish Kumar (Jr) scored the equaliser that helped HASC qualify to the I League proper next season. Satish who has had a wonderful league here gets past SESA's Jaiganesh Goltekar. HASC and SESA played out a 1-1 draw in the Second Division I League at Bangalore enough to make the grade on May 24, 2010. Photo K Murali Kumar.