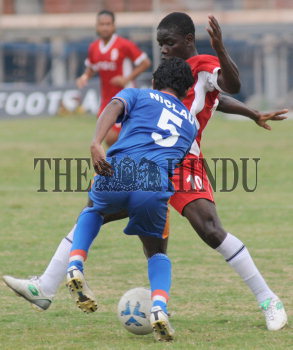 Caption : BANGALORE, 21.05.2010 : Badmas Babatunde of ONGC trying to get past SESA FC's Nicolau Colaco in the Second Division I League football encounter in Bangalore on May 21, 2010. Babatunde scored the first goal in ONGC's 2-0 win and helped his team qualify for the higher I League for the coming season. Photo: K. Murali Kumar