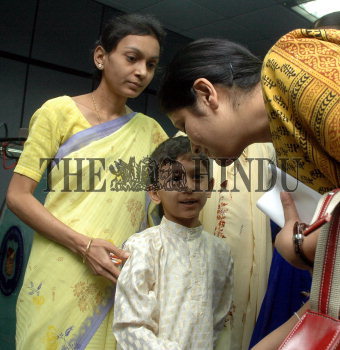 Caption : HYDERABAD : A SAGA OF GRIT : Manjula ( at left) with her son , speak to actress Jayasudha at the Asian Institute of Gastroenterology(AIG) in Hyderabad on March 07, 2007 after being honoured . Manjula , wife of slain Indian Engineer K. Suryanarayana ( who was killed by the Taliban in Afghanistan in April 2006 ) , consumed a corrosive toilet cleaner in distress damaging her digestive system . A reconstructive and life saving surgery was performed on her costing over Rs 18 Lacs ( done free of cost ) at the AIG . Having lived the crisis for the sake of her three children , she was honoured on the eve of the " International Women's Day' . . Photo: P. V. Sivakumar