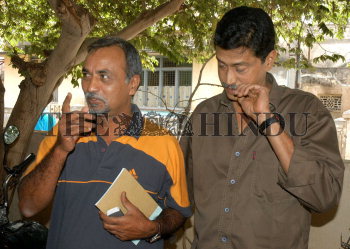 Caption : MYSORE: Krupakar-Senani, wildlife photographers during an interaction in Mysore on March 05, 2007. A documentary by Krupakar-Senani, wildlife photographers, who have produced 'Wild Dog Diaries' that narrates the struggles of the dhole (Cuon alpinus). It is a species of wild dog, a predator, which lives in a highly social PACK. This 47-minute internationally- acclaimed film was made for the National Geographic Channel International. Photo: M.A. Sriram