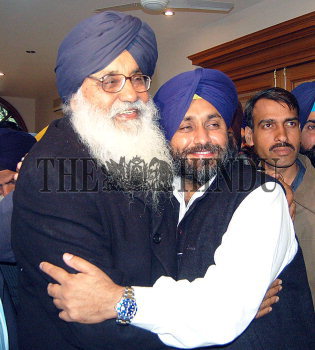 PRAKASH SINGH BADAL BEING GREETED BY HIS SON

Caption : CHANDIGARH: Shiromani Akali Dal president Prakash Singh Badal being greeted by his son and partyâs general secretary Sukhbir Singh Badal after getting peopleâs mandate to come in power in Punjab at their residence in Chandigarh on February 28, 2007. Photo: Akhilesh Kumar