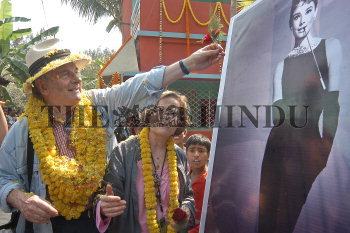 Caption : Mr. Dominique Lapierre and his wife admiring the well-known photograph of Audrey Hepburn in her iconic black dress during a visit to Keoradanga village in South 24 Parganas in West Bengal on February 28, 2007. The French writer, author of the book "City of Joy" which is based on life in Kolkata, inaugurated a new centre of "Asha Bhavan" in the village. The writer and his wife are associated with the ''City of Joy Foundation'', an NGO involved in development work in the rural West Bengal. The money received from the auction of Hepburnâs dress (seen in the photograph) has been donated to this centre. Photo: A. Roy Chowdhury