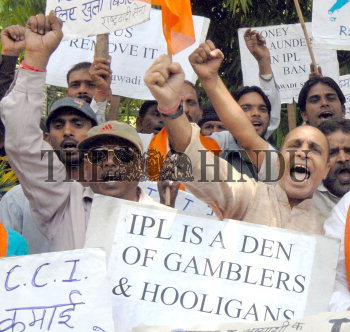 Caption : B.LINE:Protestors shout slogans against Indian Premier League (IPL) chief Lalit Modi and Minister of Agriculture Sharad Pawar during a demonstration , IPL Chairman Lalit Modi faced an uncertain future after the government launched a probe into the financial dealings of the money-spinning cricket tournament. The tax investigation began after revelations by Modi led to the resignation of Minister of state for External Affairs Shashi Tharoor and claims from the opposition that the league was a front for money laundering and illegal betting.. in the capital on 24.04.2010 . Photo: Kamal Narang