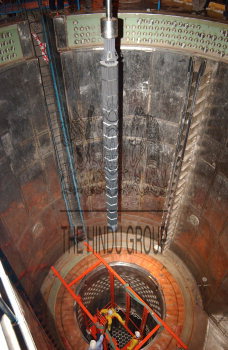 Caption : TIRUNELVELI, TAMIL NADU, 23/04/2010: A dummy fuel assembly, without enriched uranium inside, being loaded on April 23, 2010 in the first reactor of Kudankulam Nuclear Power Project, in Tirunelveli on April 23, 2010. Photo: A. Shaikmohideen