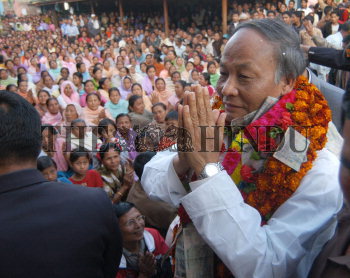 Caption : MANIPUR: Manipur Chief Minister Ibobi Singh of Congress receiving GREETINGS from his supporters after winning both the sits at the Manipur Assembly election at his home town in Thoubal, 50 km away from Imphal, capital of Manipur on February 27, 2007. The Congress government has immerged as a single largest party in this Assembly election and according to the Ibobi Singh he is all set to form the government in Manipur. Photo:Ritu Raj Konwar